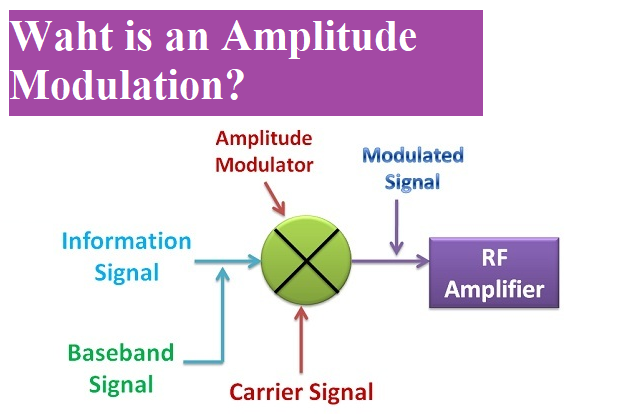 What is Amplitude modulation

Amplitude modulation is the one of the oldest modulation method to transmit the information. This technique was introduced in 20th century by Landell de Moura and Reginald when performing experiments using radio telephone in 1900s. 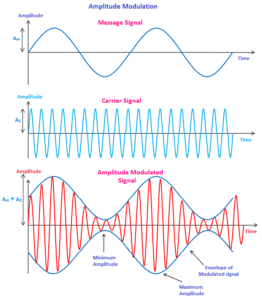 Amplitude modulation (AM) is a modulation technique used in electronic communication, most commonly for transmitting messages with a radio carrier wave.

Carrier waves are those waves in which the amplitude, frequency and phase are constant. It is high frequency and sine or cosine wave of electronics signal. The mathematical expressions of carrier wave are given below.

Those signals are modulating signal which has to be transmitted through channel. It is may be sine or cosine wave

We have carrier wave and modulating signal,

The band width of amplitude modulationhttps://www.knowelectronic.com/modulation-need-of-modulation-definition-and-types/ is the twice of the modulating frequency. 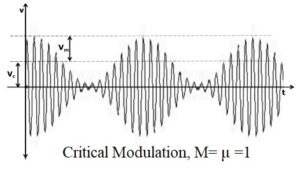 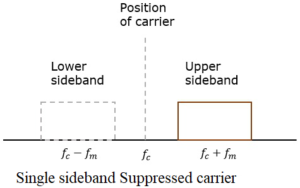 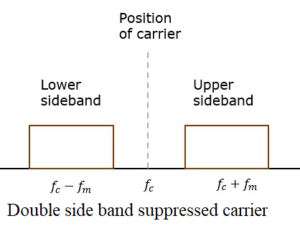 Advantage of side band transmission

Disadvantage of side band transmission

The signal Along with the upper sideband, a part of the lower sideband is also being transmitted is known as vestigial sideband. A guard band VSB is very small width to avoid the interference on either side. It is mostly used in television transmissions.

In VHF transmission, many airborne application uses AM. AM is use for ground to air radio communication.

Quadrature amplitude modulation is mostly used for transmission of data in short range wireless such as Wi-Fi to cellular communication. It is form by having two carrier 90° out of phase.

Amplitude demodulation is one of the simplest ways of modulating a radio signal or carrier. The simplest way to archive a demodulation of AM signal is uses a single diode rectifier circuit.
The other way of method for demodulation signal use synchronous techniques and provide low levels of distortion and improved reception.

What is Over Modulation and Sidebands of AM?

When m>1, this is over modulation.
(Vm / Vc) > 1
Therefore Vm > Vc, it means modulating signal is grater the carrier signal. 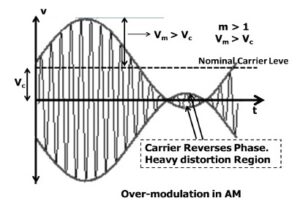 Power Calculations of AM Wave

The total power of Amplitude modulation is

When the modulation index (μ) is 1, then the power of AM wave is equal to 1.5 times the carrier power.

Some question based on amplitude modulation

Que (1). A 400 watt carrier is modulated to a depth of 75 percent. Calculate the total power in the modulated wave.

Que (2). A broadcast radio transmitter radiates 10 kw. When the modulated percentage is 60. How much of this carrier power?

Que (3). A DSB-SC transmitter radiates 1kw when the modulating percentage is 60. How much of carrier power is required if we want to transmit the same massage by AM transmission.

We required 5.56 kw to transmit the carrier component.

Each of the following multiple-choice questions consists of an incomplete statement followed by four choices (a, b, c and d). Circle the letter preceding the line and correctly complete each sentence.

c. The peak amplitude of the basic amplitude modulated wave is given by

d. The instantaneous voltage of the AM wave is

e. The modulation index of AM is given by

f. The AM wave will have

g. The bandwidth of AM wave is given by

h. If Vc , Vl and Vu, are the peak amplitudes of carrier, LSB and USB, then the relation among them in AM is

i. fc, >> fm the frequency of AM wave can be approximated by

j. The expression for total power in AM wave is

k. The maximum power of AM wave under distortionless condition is

l. The instantaneous voltage of DSBSC can be related to that of AM by

m. The peak amplitude of the DSBSC wave is given by

n. The instantaneous voltage of the DSBSC wave is

What is Modulation and Demodulation in Communication?
Shift register
To Top