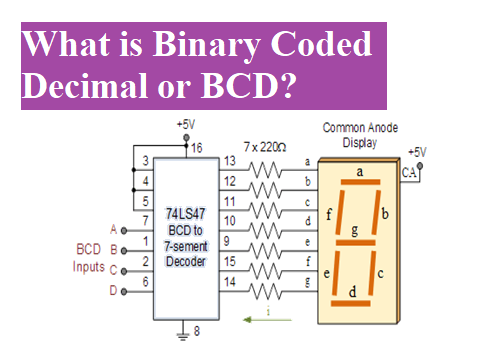 Binary coded decimal or BCD is another process to convert decimal data into binary equivalent data. As we seen in pervious tutorial of binary number section, there are many binary code each has own specification in digital and electronics circuit, with Binary Coded Decimal being one of the main ones. As we live in decimal world we need to convert these decimal numbers into binary that the digital computer can understand. 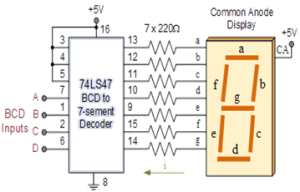 We have already seen the binary number that has n binary code represent in the 0 and 1 form. The advantage of binary decimal code is that the each decimal digit can be represented by a group of 4 binary digits. Or bit is much same as hexadecimal. So for the decimal digits (0-9) need four binary bits.

But don’t confuse in binary decimal code to hexadecimal both are not same, Whereas a 4-bit hexadecimal number is valid up to F16 representing binary 11112, (decimal 15), the binary code decimal stop at 9 binary 10012. This means that although 16 numbers can be represent using four bits for one and another four bits for six. The 16 representation in binary code decimal is 001 0110.

The main advantage of BCD is that it allow to easy covert to decimal, however the disadvantage is that BCD is wasteful as the states between 1010 (decimal 10), and 1111 (decimal 15) are not used. Nevertheless, binary coded decimal has many important applications especially using digital displays.

So for example, 35710 (Three Hundred and Fifty Seven) in decimal would be presented in Binary Coded Decimal as:

BCD is a weighted code and it is commonly called the 8421 code as it forms the 4-bit binary representation of the relevant decimal digit.

Then the relationship between decimal (denary) numbers and weighted binary coded decimal digits is given below.

Then we can see that 8421 BCD code is nothing more than the weights of each binary digit, with each decimal (denary) number expressed as its four-bit pure binary equivalent.

Note that the resulting binary number after the conversion will be a true binary translation of decimal digits. This is because the binary code translates as a true binary count.

The conversion of BCD to decimal is exactly opposite of the conversion of decimal to BCD. We can simply convert the BCD to decimal; firstly we create the group of four binary bits, starting with the least significant digit and then write the decimal digit represented by each 4-bit group. We add extra zero at the end if we need to make four bits of group.  1101012 would become: 0011 01012 or 3510 in decimal.

The conversion of decimal to BCD or BCD to decimal is a relatively straight forward task but we need to remember the BCD and decimal is not a binary number. Even through them are representing in bits. The use of BCD is in microcomputer.

It is easy to code and decode. It is not too efficient to store numbers. In BCD the number for representation of decimal no need more binary bits which creates long length due to this it is not efficient to store.

It has certain limitation which are given below-

There are two types of binary-coded decimal.

Summing Amplifier: Circuit Diagram and Its Applications.
To Top