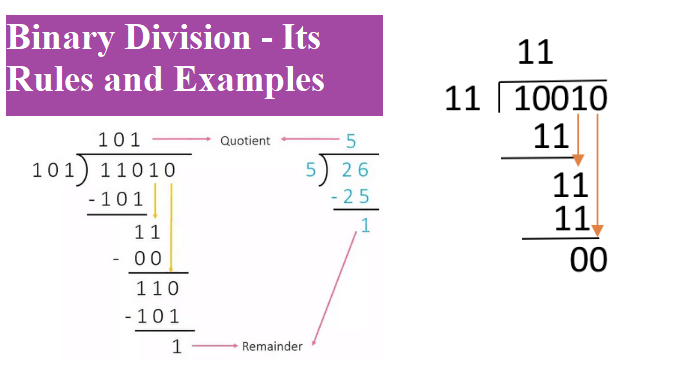 The binary arithmetic has four types which are given below:

The important operation of binary asthmatic is binary operation. The binary system has only the number one is “0” and other is “1” and the radix of binary number is “2”. It is mostly commonly use digital computer system and many more.

The main rules of the binary divisions are given below; it is much similar to decimal division rules:

In decimal number system the binary divisions is similar each other. there are following step:

How To Do Binary Division?

Step 1: since zero is the most significant bit, it doesn’t affect the value of the number; let’s remove the zero bit form dividend and divisor. So the dividend becomes (11010)2 and the divisor becomes (101)2 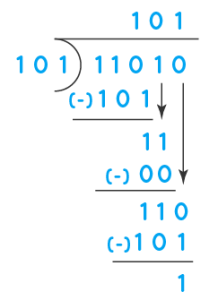 Step 2: we use the long division operation. In this step we compare divisor (101) the first digit in the dividend (11010), since the divisor is smaller, it will be multiplied with 1 and the result will be the subtrahend.

As per the binary multiplication rules:

Step 4: The next least significant bit comes down and the divisor is multiplied by 1. The multiplication result is 101 and it is bigger than 0011, this step cannot be completed.

Step 5: We write 0 as the next bit of the quotient and then after next bit 0 comes down.

The binary division operation is done and we get the result.

Binary division is one of the most important functions of binary arithmetic. A binary number system or second base is a two-digit calculation method: 0 and 1, and represents a 2-base number. Here, the prefix ‘bi’ means’ two. … Binary numerical systems are widely used in computer technology.

An Overview on Different Types of Diode and their smart operation
What is Slew Rate: Definition, Formula and Calculator
To Top