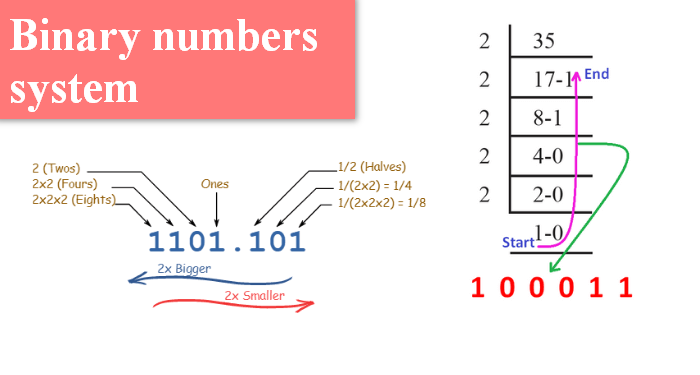 In digital electronics the binary numbers system is the one of the four types of number system. In binary numbers system the information in the form of zeros “0” and ones “1” used in digital computers and system. This number system is expressed in the radix-2. Example (101)2 is a binary number. Each digit are called bit. In this tutorial we are discus the binary number system. For example in digital communication and digital signal processing of signal contains two voltage levels and those voltage levels are Logic “0” and Logic “1”. In digital the logic “1” represent a higher voltage such as 5 volts, and logic “0” represent the low voltage level such as 0 volts or ground. In a digital computer the binary digits and computational circuits and applications they are normally referred to as binary BITS.

In digital electronics system is a way to represent the numbers in the computer architecture are four different types of the number system, such as:

In this tutorial let us discuss what are binary number and its conversion of the binary numbers to other number system, table, binary number position value and binary operation like binary addition, binary subtraction, multiplication, division and its example.

What is a Binary Number System?

In digital electronics the binary number system defined as that is expressed in number “0” and “1” whose base 2. All digital computer use binary numbers. Every binary digit is referred to as a bit

What is Bit in Binary Number?

Some of the binary number lists into decimal numbers from 1 to 30 are in the below list.

How to Calculate Binary Numbers

Here some example for the number to be operated is 1265.

The decimal number system is radix 10, where in the digits 0-9 represents numbers. In binary system operates in radix 2 and the digits 0-1 represent numbers, and the base is known as radix.

Now let us, we are going to perform the binary addition, multiplication and division operations.

We are going to perform the binary addition of two digits number given in the table below.

We are going to perform the binary subtraction of two digits number given in the table below.

Let us perform the binary multiplication understand it with example. 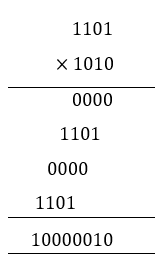 Let us perform the binary division understand it with example.

Binary bits of zeros and ones

There are only binary numbers i.e. “0” and “1” and it use in digital or electronics circuit and system. The voltage are use to represent the binary digits in digital circuit “high level” are below 10 volt and “low level” is zero voltage. The digital signal is in discrete or distractive voltage form, but we make digital signal by changing the high and low voltage level. A binary number use these levels for representation of “1” and “0”. In electronics the system are divided into two categories analogue circuit and digital circuit.

The simple example for distinguish the analogue circuit and digital circuit are give below; 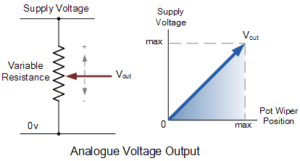 This circuit shows the analogue circuit the output form the potential meter change producing an infinite number of output voltage points between 0 volts and VMAX. the voltage is changes showily not rapidly. Some example of analogue signals includes temperature, pressure, liquid levels and light intensity.

Digital circuit example, the potential meter and single rotary switch is connected to each junction of the series resistor forming a basic voltage divider network when the switch rotating from one position to another position the output voltage level representing multiple of 1 volt on each switching as shown in graph. The output voltage is 1 volt 2 volt 3 volt 5 volt but not 2.5 volt, 3.1 volt, or 4.6 volt. The fine voltage output produce by multi switch and increase the resistance. 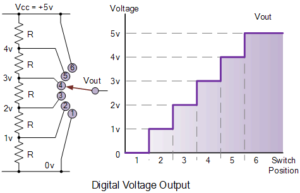