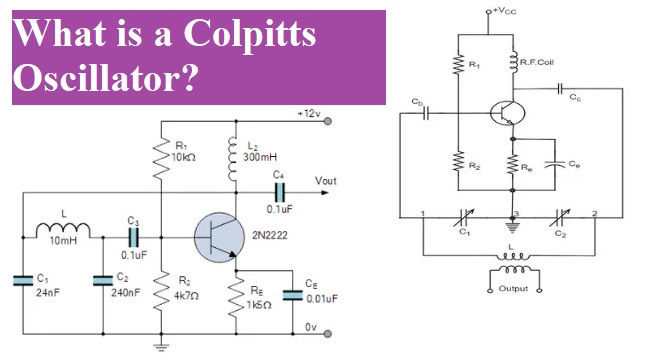 What is a Colpitts Oscillator? 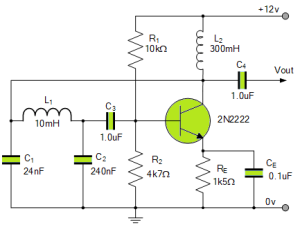 A colpitts oscillator is invented by American engineer Edwin H. Colpitts, in 1918. It is use to generate radio frequency. The colpotts oscillator is exact opposite of the Hartley oscillator as we look in previous tutorial. 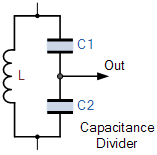 The basic configuration of collpitts is same as Hartley oscillator but the difference this time is that the tank circuit is made of junction of two “capacitive voltage divider” network instead of two inductive voltages (tapped autotransformer) in the Hartley oscillator.

The feedback circuit uses a capacitive voltage divider network. Two capacitors, C1 and C2 are in series and these series capacitors are parallel with inductor. The C1, C2 and L create a tank circuit. The condition for oscillations being: XC1 + XC2 = XL, is same as for the Hartley oscillator circuit.

The main advantage of this type of capacitive circuit is that with less mutual inductance and self inductance within the tank circuit, the frequency stability of this oscillator is improve with a more simple design.

The circuit diagram of colpitts oscillator are shown below, the circuit contains common emitter amplifier circuit and tank circuit. Resistors R1 and R2 is a voltage divide to bias amplifier. RC is a collector resistance and RE in emitter resistance. The capacitors Ci and Co are input and output capacitors for blocking the DC current and CE is a bypass capacitor, it bypass the alternating current. The one end of capacitors is joining together and other end of C1 is connected to collector of transistor via C0 and C2 is connected to base of transistor. the feedback output are taken out through this path. 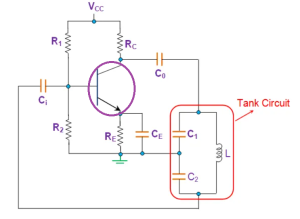 Now let us discuss the working of colpitts oscillator. Firstly, switch ON the power supply, transistor starts conduction. The collector current Ic increases due to which the capacitors C1 and C2 get charged. When acquiring the maximum charge feasible these capacitors are start discharge through inductor.

During this process electrostatics energy store in capacitor gets converts in to magnetic flux. This is store in inductor L. When inductor is fully charge it start discharging through capacitor. And again capacitor will start charging. Likewise, the charging and discharging of tank circuit element will continue the oscillations.

From the figure the output is present is across C1 and thus is in-phase with the tank circuit’s voltage and makes-up for the energy lost by re-supplying it.

The voltage across C1 and C2 are opposite in polarity as the point where they join is grounded.

Further the signal are provided 180 degree phase shift by transistor. The result of total phase shift is 0 degree or 360 degree. Which is satisfied the Barkhausen principle.

The frequency of colpitts oscillator is determined by the tank LC circuit. The formula of oscillating frequency is given as:

where CT is the total capacitance of C1 and C2 connected in series and is given as:

The amount of feedback of colpitts oscillator is depends on capacitors C1 and C2. The ratio of C1 and C2 is called feedback fraction and it is given as: 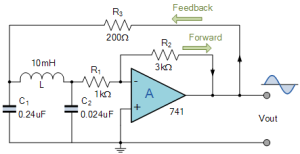 In non inverting amplifier configuration the ratio of R2/ R1 sets the amplifiers gain. The minimum gain required of oscillation is 2.9. In the figure the resistor R3 is provide the feedback path to the LC tank circuit.

The advantages of Colpitts oscillator are given below −

The applications of colpitts oscillator are given as:

Hartley Oscillator: What is it? Working and Its Applications
Gray Code: What is it? And How to Convert Binary to Gray Code
To Top