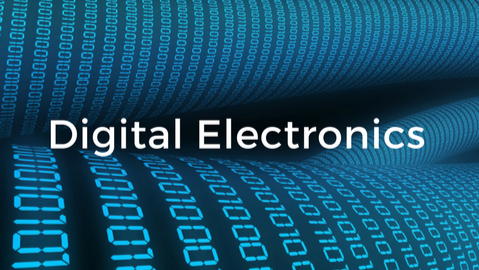 The term “Digital Electronics” is made up of two broad sub terms .One is Digital and other is Electronics. Let me take the term electronics first. If we observe our day to day life by one or the other mean we use electronics in our use. For example you get up in the morning by hiring some sound from the alarm .This alarm is nothing but one electronic gadget . Similarly you use television , computer , watch , camera  and so on .All this gadgets are electronic  in technical terms electronics means the branch of science which deals with controlled flow of electrons to perform some operations.

Now comes the term digital. Digital word comes from the same source as the word digit. Digit means something which  is countable. Digital means the thing which deals with numbers. Now if we combine the both terms digital and electronic the birth of the new term comes that is digital electronics. So in simple language the term digital electronic means controlling the flow of the electrons by means of some number logic.

Now the question arises that why we need this digital technique to control the operations of the system and why conventional electronics that is analog electronics can’t be used in some operations. So the advantages of the digital electronics are as follows:

We know that the real world signals like temperature, pressure, flow, voice etc. are all analog signals. But if we want to convert them into digital signal we require sampling of the analog signal. This sampling means to sample the analog signal at particular time interval. This sampled signal is assigned some predefined value of voltage and this process is called as quantization. Since the assigned value is the combination of the predefined values they will surely differ from the actual value of the sampled signal. This difference of the actual and quantized signal is called as quantization error.

As I have already discussed that most of the signal are analog in nature and to control the system by means of digital we have to first convert it into digital and after processing in digital domain we have to convert it back into analog domain .So in this conversion process considerable time is consumed .For this reason it is very rarely used in real time system in which system response should be achieved as soon as the input comes to the system.