If we are studying the electronics engineering the logic gate are the important concept. The basic types of digital logic gate are three, these three are AND Gate, OR Gate and NOT Gate. They are based on the Boolean function. We have also seen in digital electronics the NAND and NOR Gates are the two universal gates. The construction of combinational circuit we only using two or three NAND and NOR Gates. NOT and buffer are also the gate in which it has single input and output device that are use to control the flow of data onto a common data bus. The logic gates are playing very important role in digital electronics. It is the heart of digital electronics because it is use in IC’s, computer circuit and communication sector to perform the various type of operations. In general, the all logic gate have one output and two inputs. Some logic gates have one input and one output these are NOT gate and Buffer. The logic gate inputs are binary data. The binary data may be zero voltage and high voltage.

The eight standard individual digital logic gates are summarized below with truth table:

The Logic AND Gate

Circuit of AND Logic gate

The circuit of AND gate can be design by diode and transistor. Here we see the design of AND gate using diode. In the AND gate circuit the voltage is connected to the parallel connection of diode thorough resistor “R”. The two inputs of AND gate are anode of the diode. The high represent the +5 volt and low represent the 0 volt.

If any of the input of diode is 0 volt, than the diode become the reverse bias and it will an open circuit and the make the output Low.

When applied 5 volt across both of the diode. The both diode will start conduction which makes the output high +5 volt. 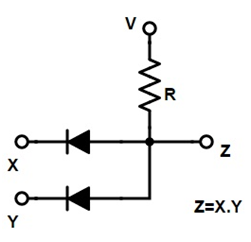 The Logic OR Gate

Circuit of OR Gate

The simplest circuit diagram of OR logic gate are shown below. It contains two diodes and one resistance “R”. The two inputs of OR gate is the input of the anode of diodes. In this case the high represented +5 volt and low represent 0 volt. When we applied 0 volt at the inputs of diode there is no conduction of diode hence output is zero.

When any of the input is high, the high input diode is forward bias and the output appears high at “Z”.

If the diode inputs are high, both diodes are forward bias and it will start conduction, thus the output also is high i.e.”1”.

The Boolean expression of the OR gate is Z = X + Y, where X and Y are the inputs Z is the output port.

The circuit diagram of the logical OR gate is shown below. 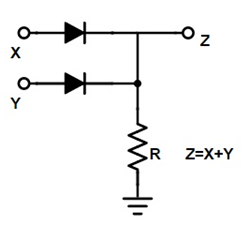 The NAND logic gate is also known as universal gate. It perform the three operations such as AND, OR and NOT. The output of NAND gate is the inverse of AND logic gate.

The NAND gate has two inputs A, B and one output Z. this circuit is driven by 5 volts.

When the high inputs of the NAND gate is connected. Than the diodes are reverse bias and the transistor is Q1 is able to drive from the supply through the resistor, And the output voltage becomes zero.

Similarly, any of the input is high the transistor become off and the output voltage become +5 volts.

The transistor based circuit diagrams of NAND gate are shown below. 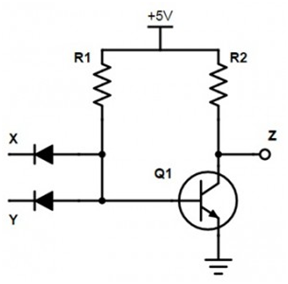 The Logic NOR Gate

The truth table of a NOR gate:

Circuit diagram of NOR Gate

The circuit contain two transistor Q1 and Q2 NPN transistor it with the voltage supply or +5 Volts.

When the inputs of the NOR gate is low, the transistor Q1 and Q2 is OFF state, so no any voltage drop across the resister. Than the output voltage is equal to the supply voltage i.e. +5 volt.

The Boolean expression of NOR gate is as Z =(X+Y)’.

The circuit diagrams of NOR gate are shown below. 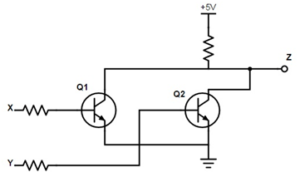 In XOR gate is the combination of one OR gate and two AND gate. It is two inputs and output. The output of XOR gate is “1” when both inputs are different. And when the inputs are same the output will be zero. Boolean Expression Q = A ⊕ B

In XNOR gate is the combination of AND and OR gate. It is the inverse of the XOR gate.

The truth table of XNOR gate;

The buffer has one input and one output. The output is same as the input in buffer logic gate.

The Boolean Expression of Hex Buffer Q = A

The truth table of Hex Buffer is given below:

The NOT gate (Inverter)

Truth table of NOT gate:

The circuit diagram of NOT gate is given below the, it has one transistor Q1.one input X and one output is Z. when the input is connected to low then the transistor is reverse biased, so the transistor is OFF. Hence the no voltage drops across the register, so the output will be high.

If transistor is ON the output will be zero.

The transistor based NOT logic gate designed is shown below. 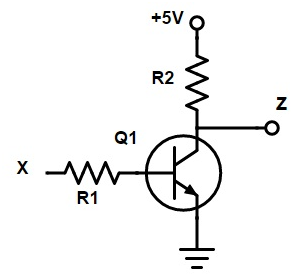 The series of 7400 IC’s are introduced in 1960s. The 7400 ICs is the family of TTL becomes most popular because it has some specific feature which is given  below:

In the fabrication of 7400 IC series we use the bipolar transistor. So they name TTL family ICs. (TTL means Transistor -Transistor Logic).

There are several IC families numbered as 74xx00. The xx will indicate the types of IC and specifications. The types of IC series is 74LS00, 74HC00 and 74HCT00 etc. Now discuss the specific types of each IC series.

It is the low power schottky diode TTL circuit. It has fast switching and power consumption is more than other logic families.

It is a high switching speed IC and it belongs to CMOS family. It consumes low power.

This is very special type of 74HC family. It has 74LS TTL compatible inputs. They are easily interfaced with 74LS series and 74HCL consume less power.

The disadvantage of the 74HCT series is less immune to the noise i.e. they have less noise tolerance.

The prefixes list of TTL and CMOS family ICs are below. 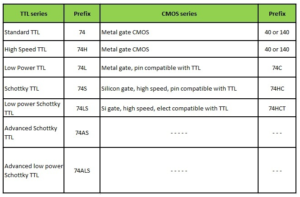 Some most used ICs number for logic gate are given below

The advantage of logic gate is based on the operation or their truth table. The logic gate circuit often found in switching circuit, communication system, computer system, safety thermostat, automatic watering system, light-activated burglar alarm and other electronics device. In ICs the logic gate finds an array.

Although Logic gates are of high popularity but it has some certain limitations: