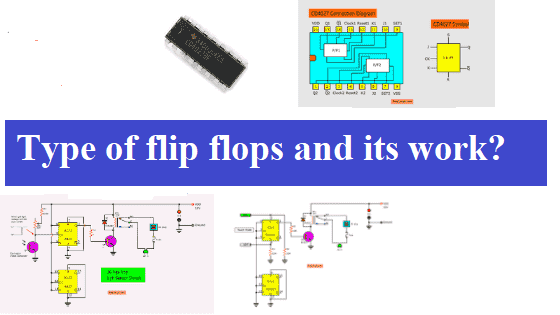 The flip flops is a sequential logic circuit electronics device with two stable states that are binary “0” or binary “1”. The store binary data can be change by applies clock pulse. The fundamental component of digital electronics is flip flops and latches. It is use in computers, communications, and many other types of systems. Flip flops is a basic storage sequential circuit.

What is a Flip Flop?

Our last lesson was about multiplexer’s demultiplexers encoders and decoders combinational logic devices where the output is dependent only on the current state of its inputs. The example of sequential circuit is Flip-flops or latches. Which have a form of memory built in. this means it can use not only the data from their current inputs but also use in previous data. Flip-flops are bistable devices. Logic gates are component of Flip-flops.

There are different types of flip flops with different character and different applications depending upon types of flip flops. Flip flop has also known as bitable multivibrator because it has two stable states. Its state can be change by applying clock pulses. There are two outputs in a flip flops that are Q and Q̅. Either of Q and Q̅ can be used as output but normal practice is to take Q as output port and Q̅ as an inverted output port. When the output Q is “1” than the flip flop is called “SET” or “HIGH” “logic 1”, and when Q is “0” than the flip flop is called “RESET” or “LOW” “logic 0”.
Below the figure show the block diagram of flip flop with many input terminal and two output terminal that are Q and Q̅.

The difference between latches and flop flops are a latches are level trigger but flip flop is edge triggered i.e. either positive edge or negative edge. Both are “ONE” bit binary storage devices. Here the some points about Latches vs Flip-Flops.

The circuit diagram of SR latch and SR flip-flops. 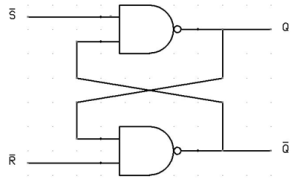 A flip-flop can be constructed using NAND or NOR gates. It is a bistable device.

The set and reset flip flop is made of NAND gates. There are two inputs and two outputs. The outputs are cross connection with inputs which are shown in figure.

It is the most versatile of the flip-flops. It has also the two inputs and two outputs and it was introduce for reduce the draw back in SR flip flop. 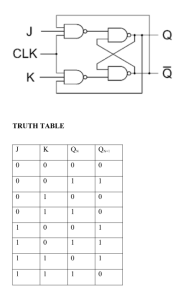 In D flip flop the D stand “DATA” and it is constructed by JK FF with each other via an inverter or NOT gate. 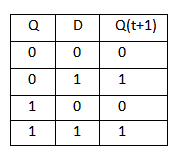 T flip-flop  can be constructed from any of these three flip flop like SR, D, and JK FF and it is also known as trigger/toggle FF.

Below the table show the inputs of FF. This gives the input and output of the flip flops.

The FF are the back bone of the digital computer it is use in various typo of application in our daily life here the some examples of the flip flops is give below.