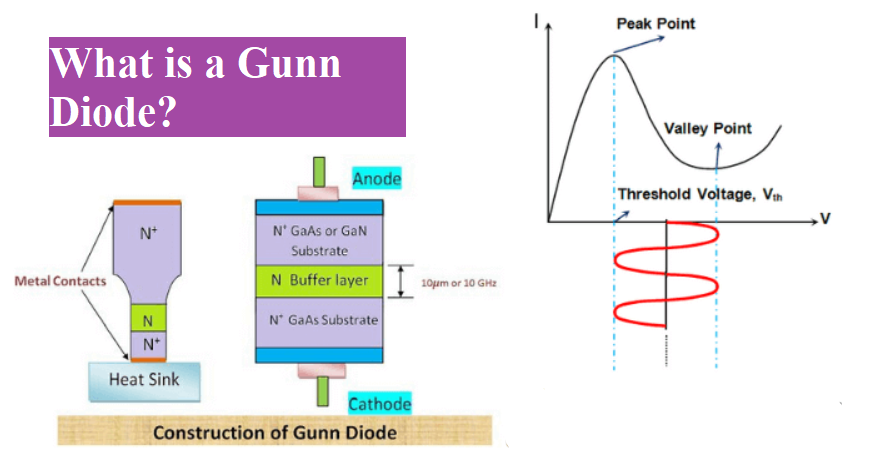 A Gunn diode is a semiconductor device. This device is also called as a transferred electron device – TED. Gunn diode is two terminal semiconductor components with negative resistance. It is based on “Gunn effect” and invented by physicist scientist J. B. Gunn in 1962. It is masterly use in electronics oscillator to generate microwave frequency, in applications such as radar speed guns, microwave relay data link transmitters and automatic door openers. In this article we are going to discuss an overview Gunn diode and how it work with applications. 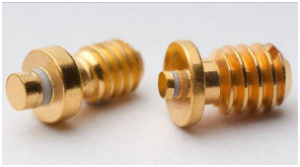 What is a Gunn Diode?

Gunn diode is two terminals semiconductor diode, which compose of only an n-doped semiconductor material, unlike other diodes which consist of a p-n junction. A Gunn diode is works on Gunn Effect. It can be made of like Gallium Arsenide (GaAs), Zinc Selenide (ZnSe), Gallium Nitride (GaN), Cadmium Sulfide (CdS), Cadmium Telluride (CdTe), Indium Antimonide (InSb), Indium Arsenide (InAs) and Indium Phosphide (InP), which consist of multiple, initially-empty, closely-spaced energy valleys in their conduction band.

The construction of Gunn diode is done with N type of semiconductor. The frequently use of material are gallium Arsenide (GaAs) & Indium Phosphide (InP) and other materials.

It uses N type material because the effect of transferred electron is simply appropriate to electrons and not holes found in a p-type material. This component has three regions which are top middle and bottom. 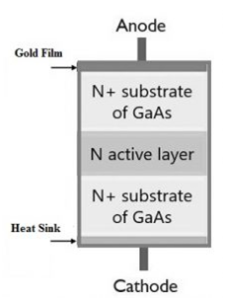 The construction of Gunn diode procedure is from an epitaxial layer of on a degenerate n+ substrate to form three n-type semiconductor layers, n+ layer are extremely doped as compare to middle n layer. The dimension of active layer is few microns to 100 microns and the doppped layer is from1014cm-3 to 1016cm-3. The dimension of layer can be changes according to the required frequency. Further it is connected width metal contact at either end of Gunn diode to facilitate biasing. 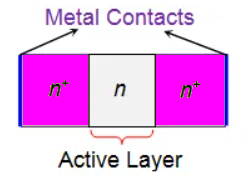 What is Gunn Effect?

“The Gunn effect can be defined as generation of microwave power (GHz) whenever the voltage applied to a semiconductor device exceeds the critical voltage or threshold voltage value”.

The diode is only made of N-type of material such as gallium arsenide and indium phosphide. This material have one extra energy band gap instead of having only two energy bands and that band are valence band and conduction band which is available in normal semiconductor materials. Initially the third energy band is empty.

We further increase forward voltage, this voltage increases field strength. The number of electrons reaching the state at which the effective mass increases by decreasing their velocity, and thus, the current will decrease.

The VI characteristics of Gunn diode is shown in below figure. The characteristic of Gunn diode is similar to the tunnel diode. From the graph, initially the current start increasing in this diode. But after reaching certain voltage level or threshold voltage the current will start decreasing before increasing again. The region where the current start decreasing and voltage start increasing is called negative resistance region and due to this it oscillates. In negative resistance region the diode acts as both amplifier and oscillator. 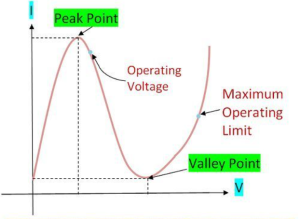 Modes of Operation of Gunn Diode

The Gunn diode is operates in four modes and those modes are given below:

This mode is defined in the region where the product of frequency multiplied by length is about 107 cm/s  and the quotient of doping divided frequency is between 2×104 than 2×105 /cm.

This mode occurs only when there is either Gunn or LSA oscillation, and it is usually at the region where the product of frequency times length is too small to appear in figure.

The advantages of the Gunn diode include the following.

The disadvantages of the Gunn diode include the following.

The applications of Gunn diode include the following.

Fast Recovery Diode: How does it Work? And its characteristics
555 Timer IC: Working, Pin Diagram, Features, and Different Operating Modes
To Top