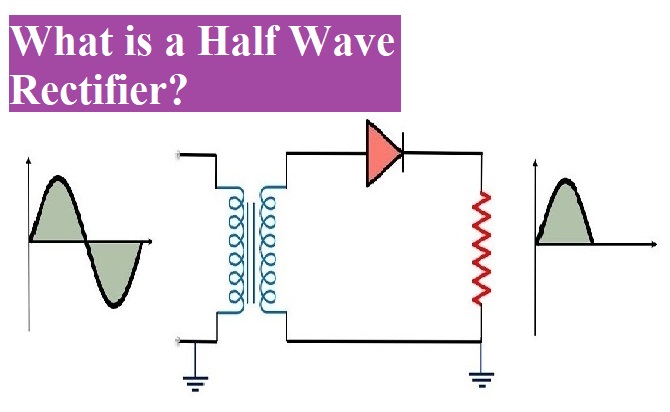 What is a Half Wave Rectifier?

Resistor at the load section

This is the component that is block the electric current flow only to a specified level.

This alternating current source is for the hole circuit supply and it is represented as a sine signal.

Working of Half Wave Rectifier

When the negative half cycle of the alternating current occurs the diode input terminal. The diode is not conduct it means circuit is open. There is no voltage induce across the load resistance.

Characteristics of Half wave Rectifier

Average and Peak Currents in the Diode

The voltage across of the secondary transformer is sinusoidal and its maximum value of sinusoidal is VMAX. The instantaneous voltage of the half wave rectifier is

And current through load resistance

Efficiency of half wave rectifier

The efficiency of rectifier is the ratio of DC power output to the applied input AC power is known as rectifier efficiency.
i.e. efficiency, η = DC power output/ AC power input
let the alternating voltage sine wave is V= VMAX sin θ is appear the secondary side of the transformer. The diode is conduct when the +ve cycle are arrive and it is off when the –ve cycle is arrive.

This shows that in half wave rectification, a maximum 40.6% of the alternation current power is converted in to direct current power

Ripple Factor of Half wave rectifier

Efficiency of Half wave rectifier

It is the ratio of output DC power to the input AC power. Efficiency is denoted by “η”.
The efficiency formula is given below

RMS value of Half Wave Rectifier

The RMS value of the load current for a half wave is given by the formula:

Form factor of a Half wave Rectifier

Form factor is the ratio of RMS value to the average value and is given by the formula:

Advantage of half wave rectifier

Disadvantage of half wave rectifier

The application of rectifier is used in power supply in almost of the electronics device. Here some application are given below:

Limitation of half wave rectifier

There are the some limitation of rectifier. If the load resistance values are low for a given capacitor, when the high current follow through the load capacitor is discharge quickly and ripple are increases.

The value of RC constant is much greater than the period capacitor remains almost fully charged, get perfect direct current output voltage. For grater RC time constant we use the large value of capacitor. This is not possible because limitation on both the cost and capacitor size. It has also limitation when the negative half cycle are arrive there is no output voltage.

Due to these type of limitation it rarely used most of the time full wave rectifier is used.

Binary Addition: Rules And its Examples

Zener Diode: Working Principle, Symbol, V-I Characteristics and Applications
What is Modulation and Demodulation in Communication?
To Top