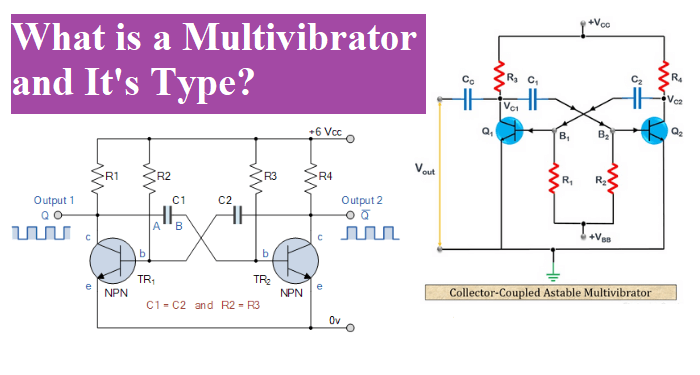 The multivibrator can be made of transistor and logic gate. In transistor the output stage is connected to previous stage of amplifier and this type of connection is called Resistance coupled amplifier

What is a Multivibrator?

A multivibrator is a sequential logic circuit that oscillates between two states one is high and other is low producing a continuous output. It is a two-stage resistance or capacitor coupled amplifier with positive feedback from output of one transistor to another transistor. Hence the ON and OFF states of the whole circuit, and the time periods for which the transistors are driven into saturation or cut off are controlled by the conditions of the circuit.

The following figure shows the block diagram of a Multivibrator.

A sequential logic circuit uses a clock pulse for synchronization. The sequential logic can also change their switching state using falling edge, rising edge, or both edges of the clock signal. The following terms are associated with the waveforms.

An Astable multivibrator is electronics circuit the switches between the two states without the application of any external pulse for its operation. This automatic switching produce square wave output and it is also known as free running multivibrator. 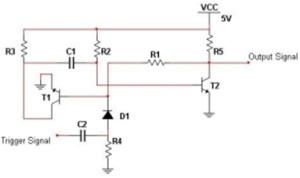 A Bistable has both the two states stable. It requires two trigger pulses to be applied to change the states. Until the trigger input is given, this Multivibrator cannot change its state. It’s also known as flip-flop multivibrators.

As the trigger pulse sets or resets the output, and as some data, i.e., either high or low is stored until it is disturbed, this Multivibrator can be called as a Flip-flop.

To get a clear idea on the above discussion, let us have a look at the following figure.

Astable :- It is use in timing, delay circuit and communication system for receiving and transmitting a signal.

Monostable :- it is use in to regenerating a distorted pulsed signal, analog systems in order to control the frequency of the signal at the output.

Bistable :- it is use in digital counter, frequency division, latches and memory storage unit.

Multivibratotr is also use in to generate non sinusoidal wave like square triangular etc. it is also use to store binary information and synchronizing multiple operations of a digital system.