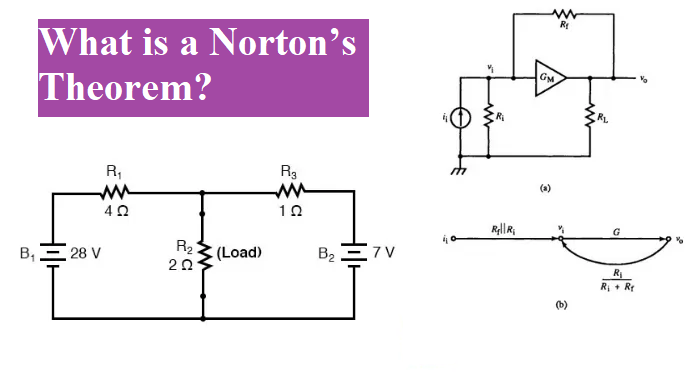 The Nortons theorem is a circuit analysis theorem use to change any complex network into a simple equivalent circuit that consists of single resistance in parallel with current source.

The Nortons theorem on the other hand the circuit reduces a single resistance in parallel with single current source. In this tutorial we are going to discuss the concept of Norton theorem with example. 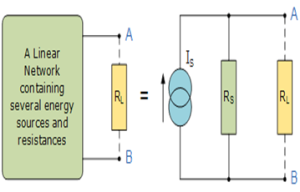 What is Nortons theorem?

It is state that “ Any linear network and complex that contain many voltage and resistive element can be replace with a simple circuit that have a constant current source in parallel with a Single Resistor“.

The Norton circuit contain the load resistance RL is concerned this single resistance RS the value of RS measure from the terminal A and B by short circuit the voltage source and open for current source, (the same as Thevenin).

Let us understand the theorem, in below circuit consist of the voltage source and more than two resistances.

After conversion into Norton 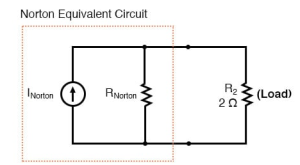 In above circuit that contain current source whose provide a constant amount of current, outputting as much or as little voltage necessary to maintain that constant current.

After that we find the Norton current (for the current source in the Norton equivalent circuit) by short circuit connection to load and find out the current. Note that this staple is exactly opposite to the Thevenin’s Theorem, where we replaced the load resistor with a break (open circuit): 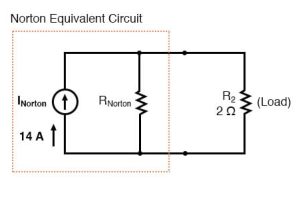 For finding the Norton resistance we do exactly same thing as we did for calculating Thevenin resistance Rth. Take the original circuit, short circuit voltage source and open circuit the current source. Calculate the equivalent resistance across the load. And figure total resistance from one load connection point to the other: 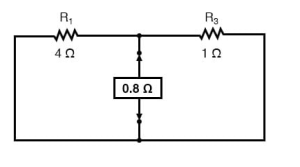 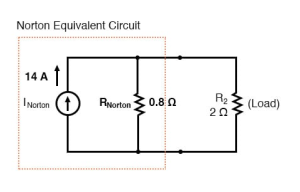 Determine the voltage across the load resistor

For finding the voltage across the load resistance we reconnect our original resistance 2 Ω, and analysis the circuit as a simple circuit.

Another example of Nortons theorem:

Find out the Norton equivalent circuit. 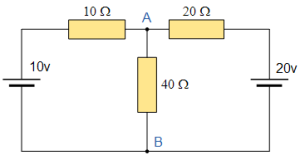 For Find out the Norton equivalent of the above circuit, firstly we remove the load resistor 40Ω and terminals A and B to give us the following circuit. 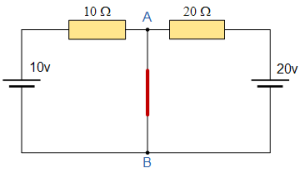 When the terminal A and B is short circuit the two resistances is 10 Ω and 20 Ω are parallel across their two respective voltage sources. And the current through each resistor as well as the total short circuit current can now be calculated as:

with A-B Shorted Out 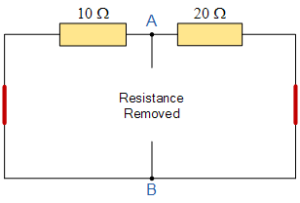 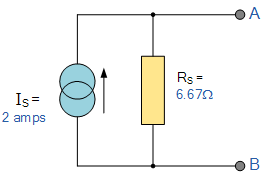 Now we connect the load 40Ω across the A and B terminal.

Again, the two resistors are connected in parallel and calculate the total resistance.

Calculate the voltage across the terminal A and B with load resistor connected is given as:

Then the current flowing in the 40Ω load resistor can be found as:

The basic procedure for solving a circuit using Norton’s Theorem is as follows:

Thevenin Theorem: What is it? Solved Example with Step by Step Procedure
What is High Pass Filter? – Circuit Diagram, Characteristics & Applications
To Top