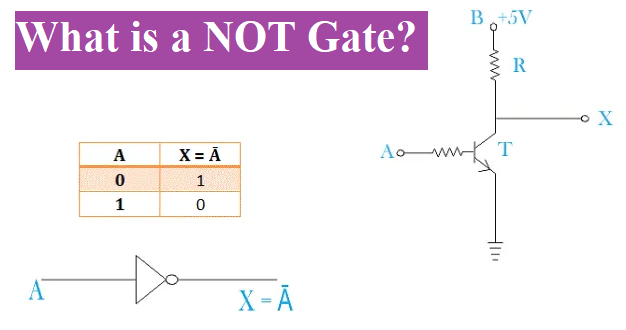 What is a NOT Gate?

Symbol of NOT gate

This logic consist only one input and one output terminal. It has bobble on the head of triangle which shows the inverts the output. The Boolean expression of digital logic NOT: Y =Ā. Here bar (-) shows the inverting of input.

Logic NOT has property to invert the input terminal. If the input single is “HIGH” the output will “LOW” and vice versa. This gate is not use for decision making like wise AND or OR gates in which has two terminal input. The NOT is also available in IC’s in 4 or 6 pin.

Other digital logic gates are: AND gates, OR gates, NAND gates, NOR gates, XOR gates and XNOR gates.

NOT is also design with a transistor. The circuit diagram of NOT with transistor is given below: 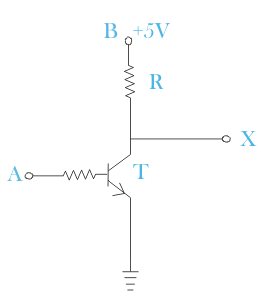 Working of NOT Gate

Let us understand the working of NOT gate with transistor circuit with high input i.e. +5V. When applied +5v at base terminal, transistor start conduction. The Vcc voltage of transistor will get a path to the earth through resistor R. At ON stage the transistor is behaves like a short circuit and all voltage drop across resistance R and now voltage appear at X the output (X) and hence the output of the inverter is be zero. 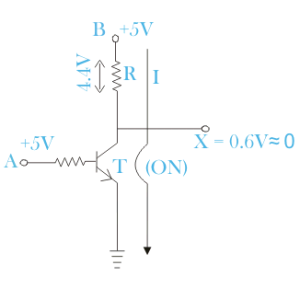 Now understand the behavior of transistor when in base (A) voltage is “0” or grounded. 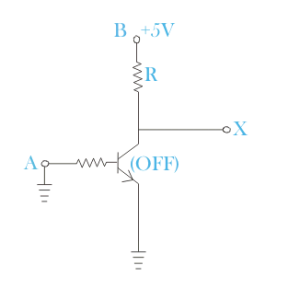 The transistor behaves like an “OFF” circuit because there is no base current and the power supply of transistor is not a grounded path. So, entire voltage appears across the output terminal.

NAND and NOR Gate Equivalents

Commonly available logic NOT gate or Inverter IC’s include:

The IC 7404 is the NOT which is commercially available in market. In this IC package the number of transistor is six or simply six NOT gate. 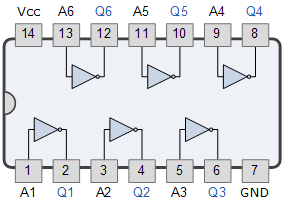 People also ask about NOT gate

What a NOT gate does?

What is NOT NOT gate?

A NOT is a digital logic gates. It consist only one input and output terminal. Logically with NOT gates, the input and the output swap, that means input is zero the output is one or input is one output will be zero. It negates the values of data or signal in its input.

What is NOT gate also called?

This gate performs inverse operation. So, it is called inverter circuit.

What is the equation of NOT?

NOT is also known as inverter circuit. If the input is “A” than output will be “Ā”. The “Ā”. It performs inverse or complement of the input giving. The Boolean Expression is: A = Ā (NOT A).

What is meant by NOR gate?

The NOR gate is one of the type of digital logic circuit that perform compliment operation of OR gates. Signal. If both input is HIGH than output is low. And if any one of the inputs is high than output is LOW. NOR is the inverses of the OR operator.

Is NOR a universal gate?

Who invented the NOT gate?

Mathematician George Boole invented the NOT which is died 150 years ago.

WHY IS NOT gate called an inverter?

The NOT performs compliment or inverse operation. So, it is called inverter.

What is the Boolean expression for a NOT gate?

The Boolean Expression of digital logic NOT is: A = Ā (NOT A).