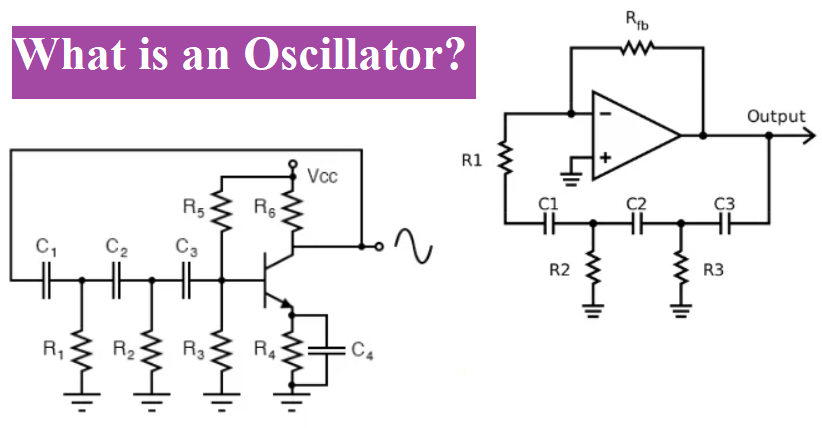 The oscillator are an electronics circuit that are use to generate a sinusoidal wave or continuous wave at a certain frequency range. The above figure shoes the block diagram of oscillator circuit with positive feedback. This feedback differentiates the amplifier and oscillator. An oscillator convert DC signal to AC output voltage. The output wave form may be wide range of different shapes and frequencies, and can be either complex in shape, or be a simple pure sine wave depending upon the application. 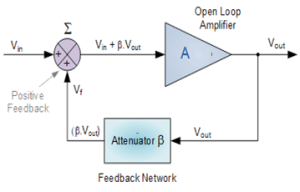 What is an oscillator?

An oscillator is an electronics circuit which produces a continuous wave without any input. It basically converts the unidirectional current flow of DC source into an AC waveform which is of the desired frequency, as decided by its circuit components. When an amplifier with positive feedback is called oscillator.

An oscillator is a self sustaining circuit, it produce a continuous wave at a single sinusoidal frequency. Thus for an electronics circuit to operate an oscillator it must have follow some characteristics.

An oscillator input has summing of feedback amplifier. The gain products of inverting amplifier and feedback amplifier must be unity or garter than unity. It also have phase shift of 360 degree or zero phases shift. The amplifying device must be operational amplifier or Bipolar Transistor is required. 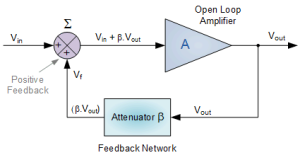 Where: β is a feedback fraction. 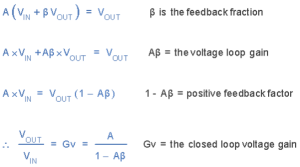 The feedback network is basically an attenuation circuit that has a voltage gain of less than one ( β <1 ). Oscillations start when Aβ >1 and then returns to unity ( Aβ =1 ) once oscillations are sustained.

The basic type of oscillator is:-

Barkhausen Criterion or Conditions for Oscillation

The oscillator circuit must have to follow the two criteria for continuous produce wave from, called as Barkhausen’s criteria. These two conditions are

In a LC oscillator, a tuned inductor-capacitor circuit alters the phase shift of 180 degree of input signal. Let us see the Barkhausen’s criteria with full explanation; 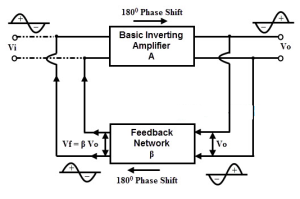 Let us consider the input voltage Vi is applied at the input of an inverting amplifier, then inverted output voltage will be:-

The output voltage of feedback circuit with feedback gain β is

The negative sign indicted phase shift of 180 degree of V0.

In oscillator the feedback output must drive the amplifier; hence the Vf must act as Vi. For achieving Vf  = Vi , the A β in the above expression should be 1, i.e.,Vf = Vi when A β = 1.

That condition the product of amplifier gain and feedback gain is unity is called as Barkhausen criterion for oscillation. 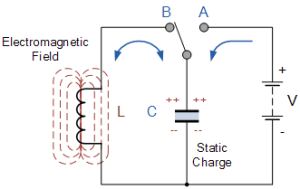 The electrical energy is lose in real resistance of the inductor, in the dielectric of the capacitor due to this loses the oscillation steadily decreases until they die away completely and the process stops. 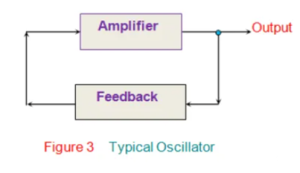 Once the power supply is turn “ON” oscillation start. The gain of oscillator is

Condition for Oscillation: Aβ < 1: the output signal will die out (Damped oscillations)

Aβ > 1: the output signal will build up.

There is much type of oscillation, but it broadly classified into two main categories

The main types of Oscillators include:

The oscillation can be also classified into various types depending upon the parameter like shape of wave, feedback etc. These types of classification are given below:-

There are some common example of oscillators is listed below:-