A photodiode is a special type of PN junction diode in the light energy are converted into an electric current or that generate the eclectic current when light exposed known as photodiode, it has also called photo-detector or photo-sensor and light detector. It is design to operate in reverse bias region. The material uses for photodiode construction are Germanium Silicon Indium and gallium arsenide.

What is a Photodiode?

A photodiode is a semiconductor device that converts the light energy to electrical energy (voltage or current). The other name of photodiode is photo-detector, photo-sensor, or light detector. It is operate in reverse bias region mans the positive terminal of the supply is connected to the N terminal and the negative side of the batter is connected to the P terminal. It is highly sensitive diode to light so when light or photons falls on the it. It convert the light to electrical energy. The solar cells are the best example. Because it converts the light energy to electrical energy. The solar cells only work on bright light. 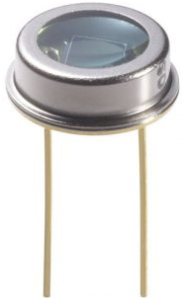 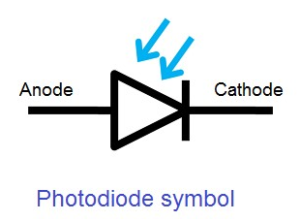 The construction of photodiode is similar to the PN junction diode because it has two layers of P-type and N-type semiconductor, the P-type semiconductor are form to add pentavalant impurity and N-type semiconductor form by the addition  of trivalent impurity. The contacts of two layers are made up of metals to form two terminal cathode and anode. The PIN diode (p-type, intrinsic and n-type) structure is mostly use in photodiode in place of PN junction diode because the PIN diode has fast response time, PIN are mostly use in high speed applications. 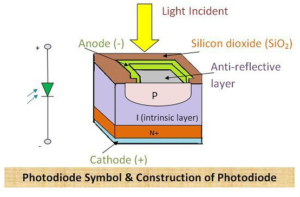 In photodiode, a small reverse current flows through the diode that is called dark current. The dark current followed by minority carrier, and also flow when no radiation expose on it.

Generally, when the light fall on the photodiode the covalent bond are ionized, due to this hole and electron pairs produce. The holes and elections are the cause of photocurrent. These pair is form when the energy of photons is more than the 1.1eV hits the diode. When the high energy of photons is entered into the depletion region of diode, it breaks the covalent bond and releases the elections from the atom. When the electron are eject that produce the hole and flow of current. 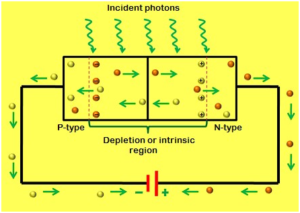 As we know, an electron is negative charge and holes are positive charge. The electric field is created by depletion energy and this electric field moves the electron hole pairs away from the junction. Hence the movement of holes to anode and elections moves to cathode, this movement produce photocurrent.

The photon energy is directly proportional to the photon absorption intensity. The sum of the absence of light and the photocurrent is total current through the photodiode. So the sensitivity of the device is depends on the absent current.

The operation of photodiode is in three mode and they are given below:-

Let us discuss of these three modes in brief:

In photoconductive mode, photodiode will act in reverse bias condition, the cathode is connected to the positive terminal of the batter and the anode terminal is connected to the negative terminal of the batter. When we increase reverse voltage. Due to this increase voltage the width of the depletion layer will also increase. The increment of depletion region will reduce the junction capacitance and response time. In this mode of operation is fast but produce electronic noise. 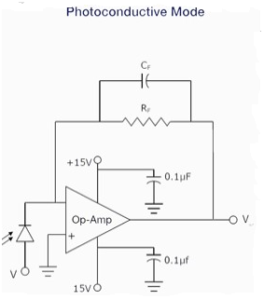 The overview of photovoltaic mode is called zero bias modes when the photodiode is operate in ultra level light and low frequency application. So this mode is used. The voltage is produce when photodiode is irradiated by a flash of light. And the voltage will be very small range and non liner characteristic. When it is connected with OP-Amp in photovoltaic mode, here will be a very less variation with temperature. 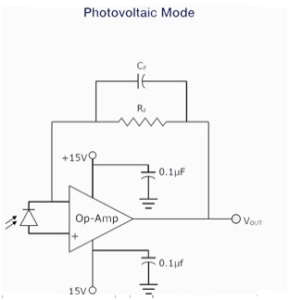 The avalanche diode mode, the diode operates in high reverse bias voltage. It allows producing to electron hole pair and it also produces internal gain within the photodiode. Hence the internal gain increases the device response.

Connecting a Photodiode in an External Circuit

The photodiode is operating in reverse bias in a circuit. The cathode is connected to the positive of the supply voltage and anode to ground. When illuminated by light, current will flow from the cathode to anode. 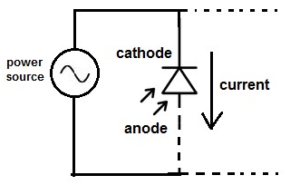 The amount of current flow form anode to cathode is very small and this current value is insufficient to drive an electronic circuit. When we use the photodiode in external circuit we need a battery source help to increase the current in a circuit. 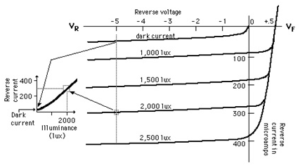 The advantages of photodiode are following which are given below.

The disadvantages of photodiode are following which are given below.

Which is better Photodiode or Phototransistor?

The photo diode is a light sensitive electronics component. It is made by semiconductor and the photo diode convert the light energy to electrical energy. The current produce by photodiode is very small. It is mostly use in solar panel.

The photo diode is convert the light energy to electrical energy

Working: In photo diode, a small reverse current flows through the diode that is called dark current. The dark current followed by minority carrier, and also flow when no radiation expose on it. Generally, when the light fall on the photo diode the covalent bond are ionized, due to this hole and electron pairs produce. The holes and elections are the cause of photocurrent. These pair is form when the energy of photons is more than the 1.1eV hits the diode.

The purpose of photo diode is use to convert the light energy to electrical energy, optocoupler, communication and consumer electronic

The difference of LED is emitting the light but photo diode absorb the light. And the LED convert the electrical energy to light energy and photo diode is just opposite of the LED.