It is easy of manufacture, low cost and eases of use in verity of applications in photographic light meter and detects light levels etc.

What is a Photoresistor or Light Dependent Resistor (LDR)?

Photoresistor is also known as Light Dependent Resistor. It us a electronics component whose resistivity is a function of the incident electromagnetic radiation. Hence it is a light sensitive device. So, it is called photoconductive cells, photoconductor or simply photocells. It is constructed by a semiconductor material with high resistance.

“Photoresistor is a variable resistor when light incident on it the resistance decreases. It is inversely proportional with the intensity of light”

The symbol of Photoresistor is based around the resistor circuit but it shows the light in the form of arrow. The figure shows the symbols of light dependent resistor or photoresistor. 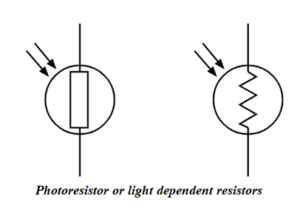 Photoresistor or LDR are made of semiconductor material and it is a passive device. The photoresistor are categorized in two types depending on the materials used to construct them. These two types are given below:

Basic structure and construction of Photoresistor

The basic construction and symbol is given below: 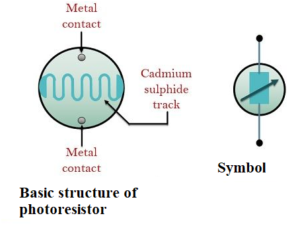 The zigzag patterns are made of cadmium sulphide. This zigzag pattern are use to get the expected power rating and resistance. The hole structure are covered in plastic so as to have direct exposure to the incident radiation.

Working principle of a Photoresistor

Hence when the sufficient light energy strikes on it, more and more electron in valance band get excited to moves toward to conduction band in a large number of charge carriers. Due to this more and more current starts flowing through it when circuit is close and we say resistance of the circuit is decreases.

Thus, as the light intensity increases, the number of free electron increases due to this the photoconductivity of material increases and photoresistor is decreases of the material. This is called working principle of light dependent resistance-LDR. 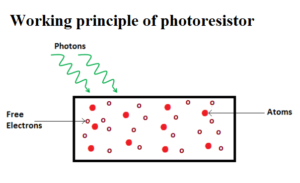 The approximately relationship between resistance and illumination is:

Here, R is resistance in ohm
E is illumination
A and α are constant
The value of constant α is decided by manufacturing procedure and Cadmium sulphide. 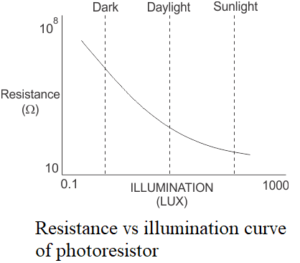 Photodiode and photoresistor are non-liner passive device. Its sensitivity depends on the wavelength of light. Some photocell or photoresistor are made for certain range of wavelengths. Based on the material are uses on it. It has different spectral response curves.

When light is incident on photocell. It usually takes 8 to 12 ms for change in resistance. While it take one or more second for resistance to rise back again to its initial value after removal of light and this phenomenon is known a resistance recovery rate. And it is use in audio compressors. The LDR is less sensitive than photodiode. The photodiode and photoresistor are not same, a photodiode is a P-N junction diode that converts light energy to electrical energy while photoresistor is a passive component and it does not convert light energy to electrical energy.

Many electronics project are based on photodiode and photresistance. The applications of photresistor are use in medical, astronomical and embedded field. Some project base on photresistor is given below:

Photoresistors have low cost and simple structure. It is often used as light sensors. Some application of photoresistor is given below

What is Photoresistor material?

The photo-resistor are made by silicon and germanium. It also use some other type of semiconductor materials for construction of photo-resistor such as cadmium sulfide or cadmium selenide.

What is a photoresistor sensor? 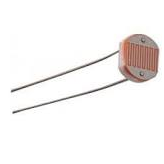 Photoresistor Sensor (LDR)
it is also known as light dependent resistors (LDR), are light sensitive devices are often used to indicate the presence or absence of light, LDRs have a sensitivity and non-liner device and depending upon the wavelength of the light applied

How does a photoresistor sensor work?

Hence when the sufficient light energy strikes on it, more and more electron in valance band get excited to moves toward to conduction band in a large number of charge carriers. Due to this more and more current starts flowing through it when circuit is close and we say resistance of the circuit is decreases.

What is the difference between photodiode and Photoresistor?

What are the two types of Photoresistor?

Photo resistor or LDR are made of semiconductor material and it is a passive device. The photo-resistor are categorized in two types depending on the materials used to construct them. Is

Why is Photoresistor used?

Photo-resistor is a light dependent resistor it is mostly use to detect the absence and presence of light and measuring the intensity of light.