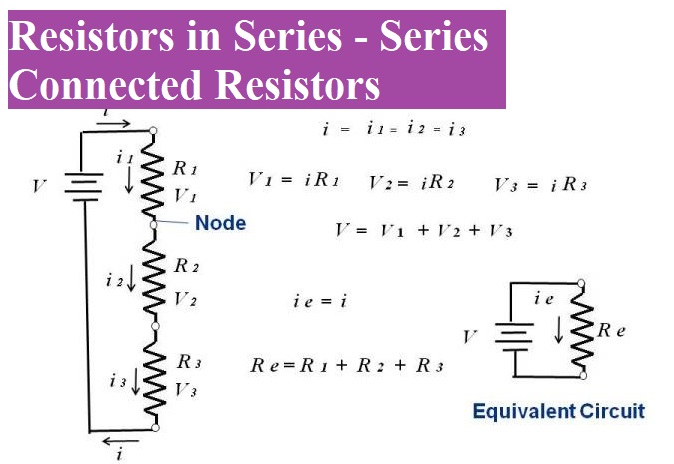 A resistance is an electrical component and the resistors in series are controls the flow of electric voltage in an electrical circuit. Also we can use to control the voltage or specific voltage to operate the some sensitive device, which is damage by over electrical voltage. The current through the resistor is directly proportion to the voltage and inversely proportional to the resistance. When we said the resistance in series connection it means they are connected to daisy chained together in straight line with common current flow in straight line.

Resistors in a Series connection

When the resister is in series connection it means the resister is in daisy-chained together in a single line. Subsequently, the current flowing through the first resistor than second and so on because in series connection there is no another way to pass the current. In a series connection of resistance they are no current divided. A resister can be use to convert voltage source to current source and the current source to voltage source. In an electric circuit the complex combination of resister can be replaced by the one single equivalent resistance REQ or impedance, ZEQ and no matter which type of combination of the resistor network, all resistors follow the basic rule of electric i.e. Ohm’s Law and Kirchhoff’s Circuit Laws.

The above is the example of R1, R2, R3 and R4 are all connected in series between points A and B with common current 1 mA follow.

The above figure show the circuit of resistance in series which is connected to the voltage “V”. The total resistance of the circuit is the individual sum of the resistance, which is RT = R1 + R2 + R3

Resistors in Series Example No1

The figure show the resistance and voltage circuit with proper value calculate the equivalent series resistance, series current, voltage drop and power for each resistor, 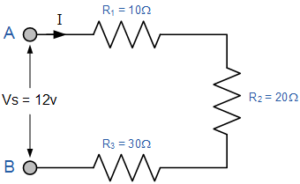 All the date in tabular form given below:

For the circuit above,

From the above example the supply voltage is 12 volt and all resistor are connected in series with a single supply DC voltage, different voltage appear across the individual resistance producing a circuit called a Voltage Divider. 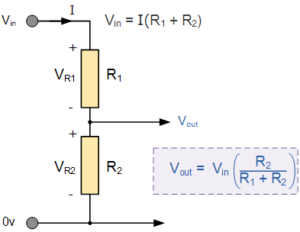 The above circuit show the voltage divide. In this circuit diagram there are two resistance R1 and R2 are connected together in series and the supply voltage is Vin and output voltage is Vout is taken from across resistor R2. The output voltage is calculated by given formula which is given below:

If more resisters are connected in series have different voltage appear on the individual resistance. So, if we had three or more resistances in the series connection, we can still use our now voltage divider formula to find the voltage drops across each one. The circuit is given below.

Resistors in Series Example No2

Find the voltage between X and Y 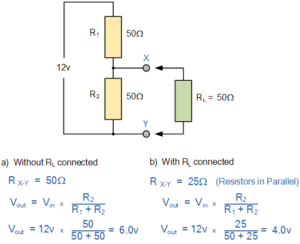 The applications of series resistance are give below

When two or more than two resistance are connected together in daisy chain in a single branch, the resistor are said to be connected together in series. In series connection of resistance is carry the same current it means there is no divider of current in circuit only division of voltage across the individual resistance because the value of resistance is differ. The voltage across the individual resistor is determine by using Ohm’s Law (V = I*R). Then the series circuit is called voltage divider network.

How do you calculate resistors in series?

What happens when resistors are connected in series?

When we connect the two or more than two resistance in daisy chain is called series  resistance. It divides the voltage to protect our sensitive electrical equipment

What is the purpose of a series resistor?

The purpose of series resistor to

Can you use two resistors in series?

What is a TRIAC : Working & Its Characteristics
Introduction of Photodiode
To Top