Triac is semiconductor devices that are mostly used in AC power control circuit. They can switch and control high level of current and high level of voltage, and over both parts of an alternating current (AC) waveform because once turned “ON” TRAIC it conduct in both direction allowing alternating voltage to passes completely in both the positive and negative cycle. The triac circuit is use in verity of application where the power switching is needed. It used in dimmer for domestic lighting, motor, heaters and many other power control situations including electronic switches.

What is a Triac?

Triac is switching electronics device has three terminal. It is different from the other silicon controlled rectifiers (SCR) because it conducts in both the directions, whether the applied gate signal is positive or negative. Those control the current flow in a circuit. It belongs to the thyristor family. It is a bidirectional switching device that can pass the current in both forward and reverse direction, means they can conduct in both the conditions of the gate signal, positive and negative. It is a three terminal device, four layers, bi- directional semiconductor device that control AC power. The maximum rating of triac is 16kw. The full form of triac is Triode for Alternating Current (TRIAC) or Triode for AC.

When we connect two equivalent SCRs in reverse but parallel to one another and gates, these two SCRs are connected together to form a single gate, it will form the triac. The symbol is shown below. The three terminal of triac is level by Main Terminal 1 (MT1), Main Terminal 2 (MT2) and Gate (G).

The anode 1 and anode is MT1 and MT 2 respectively. The triac can allow the current flow either MT1 to MT2 or MT2 to MT1, there will not be any current until we inject a gate current pulse at G. The triac are the thyristor family of devices. It is a bidirectional electronics component that can pass the current in both forward and reverse direction due to this region it is an AC control device

When two SCRs are connected in reverse direction, but in parallel with common gate terminal. The common gate connected to both P and N region due to which gate signal may be applied which is irrespective of the polarity of the signal. Hence it works for both polarities which means that device is bilateral. The three terminal is main terminal 1(MT1), main terminal 2(MT2), and gate terminal G. below the figure shows the construction. 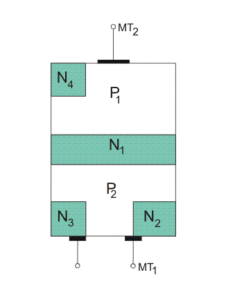 There are some different modes of operations:

The path for current flow through the P1-N1-P2-N2. The path P2-N3 is forward the current is injected into P2 on the triac.

The path for current is P2-N1-P1-N4. The P2-N1 and P1-N4 are forward biased but N1-P1 is reverse biased. The triac is called negatively biased.

P2-N2 is forward biased and current carriers are injected to turn the triac “ON”. This type of mode has a disadvantage and it should not use for high (di/dt) circuits.

Characteristics of a Triac

The V-I characteristics of Triac is similar to the SCR, but it applicable to both positive and negative voltages. The operation is summarized below:

The MT1 terminal is positive with respect to MT2 and gate is positive terminal. The V-I characteristic of a triac are given below with different quadrants. 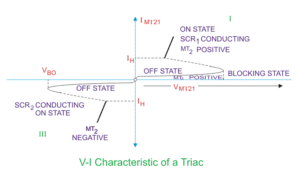 It is use in many electronics circuit. The electronics components are often use in low and medium AC switching are required. The use of triac is given below: