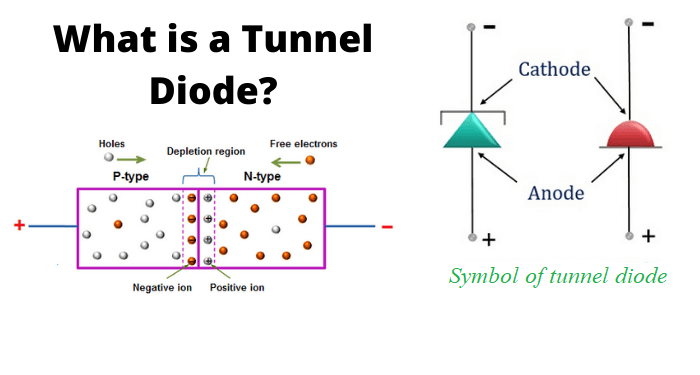 The heavily doping of PN junction is called tunnel diode in which the relation between voltage and current is inversely i.e. the voltage increases as the electric current decreases. The tunnel diode is a fast switch and is used in a variety of system and high frequency oscillators and voice amplification circuits.

The operation of the tunnel diode depends on the principle known as tunneling. In electronics, the tunneling is direct flow of electrons in a small depletion region from N side conduction band to the p side of valance band.

What is a Tunnel Diode?

The tunnel diode is also called Eaki diode. The semiconductor diode has “negative resistance” characteristics. Property and this effect are called tunneling. The tunnel diode is a heavily doping of normal PN diode that is about 10 nm wide. Heavy doping is cause of broken band space, where the electron of the conduction band is more or less aligned with the valence band holes.

The tunnel diode is a negative resistance element. The doping concentrations of P and N region in range of 1024 – 1025 m-3. 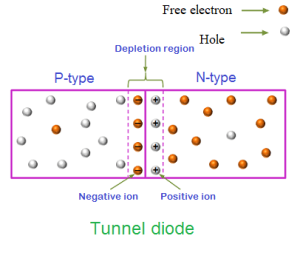 For making the tunnel diode commonly use germanium element. This diode can also use another type of element for such as gallium arsenide, gallium antimonite, and silicon.

The small width of depletion region the charge is easily passes through it. It does not require any force and this effect is called tunneling effect and diode is called tunnel diode.

When the tunnel diode is unbiased it means no voltage appear across the diode. In that case, the conduction band of the entire semiconductor material overlaps with the valence band of the p-type material. And this happens because of the heavy doping. So, due to this overlapping when the temperature raises the electrons tunnel from the conduction band of the n region to the valence band of the p region and similarly the holes tunnel from the balance point of the p region to the conduction band of the n region. the note for the point is that equal number of electrons from n region and holes from p region will flow in opposite direction so because of this equal number of electrons and holes the net current across the diode will be zero so we can say that “zero” current flows through this tunnel diode when it is in unbiased condition. 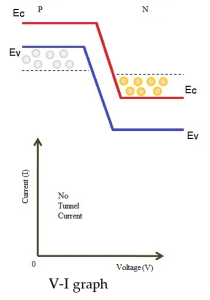 W = Width of the barrier

E = Energy of the barrier 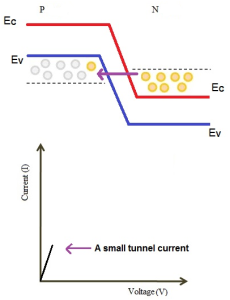 When the voltage applied to the tunnel is slightly increased then due to this increase in voltage as you can see here overlapping of the conduction band and balance band is increased or in simple words the energy level of an inside conduction band becomes exactly equal to the energy level of a p side balance band. And as a result of this overlapping maximum tunnel current flows through the diode. So see here this is the VI characteristic graph of tunnel . So when the voltage is slightly increased so because of this overlapping here maximum tunnel current flows through the diode. 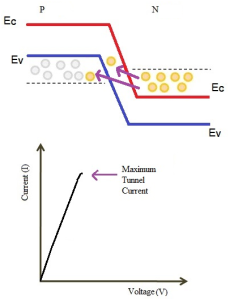 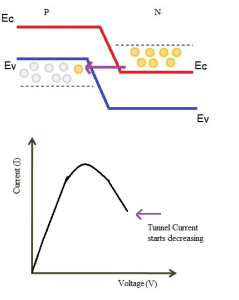 Now let’s see the VI characteristic graph of the tunnel diode. If we go increasing the forward biasing voltage then the current increases to its peak point value which I represented as Ip. When we go increasing the voltage after this peak point voltage then the diode current starts decreasing till it reaches its minimum value called valley point. At this particular point the conduction band of n-type and variance band of p-type are no longer overlap. So when we go increasing the voltage after this valley voltage then the current starts increasing again as an ordinary PN junction diode. The region between point A and point B is called negative resistance region. In this negative resistance region as we discussed earlier current decreases with increase in applied voltage. 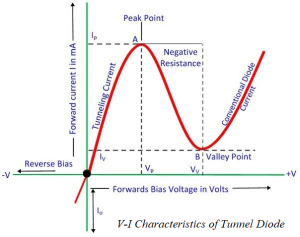 The advantages of a tunnel are given below −

The disadvantages of a tunnel are given below −

Applications of a tunnel diode are given below −

Binary subtraction and its rule
Varactor Diode Characteristics, Working and Applications
To Top