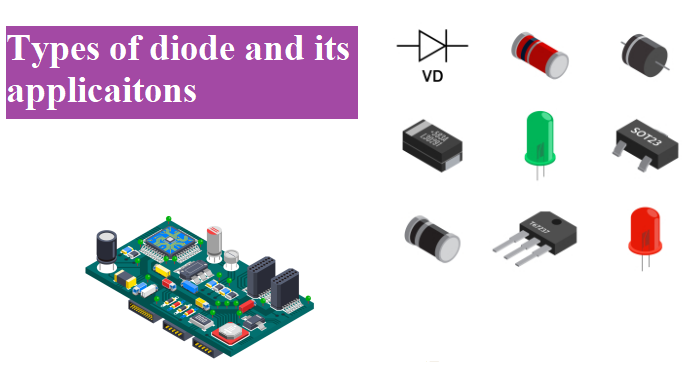 The diode is a two terminal electronics device that conduct in only one direction. This means it is a unidirectional component. The basic use of diode is switching and rectifying an electrical signal. The diode is use in also various types of applications like communication, digital electronics and many more. The most of the diode is made of silicon but in other case the Ge (germanium) is also used.

The diode is two terminal electronics component that rectify the electrical signal. It is a unidirectional component that allows only one direction of flow of current. Most of the diode is made of silicon material but in some case the Germanium and Gallium Arsenide are use.

The terminal name of diode is anode and cathode. The anode terminal is positive and cathode is negative terminal of diode. The diode operation can be classified in two way o ways:

Types of diode and symbol

The different type of diode is explained below. Let us now see about few common types of diodes one by one. 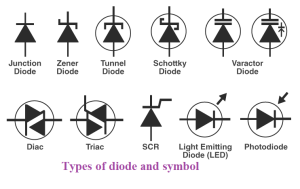 This is a small device which is made of silicon or germanium type material but its characteristics are dependent on the doping material. It is use in general purpose diode applications parametric amplifiers, high switching and many more other type of applications. It is a conventional diode.

Peak Reverse Voltage (VPR) – It is the maximum reverse voltage of diode before it breaks down.

Reverse Current (IR) – when the diode is reverse bias a small current flow through it. This current is called reverse current.

Reverse Recovery Time – The time required for reverse current to fall down to IR.

The use of large signal diode is

The performance of this diode is high so it is use in those place where the high voltage and current are required.

It is most use full diode in voltage regulator that provides a stable voltage in circuit. It is operated in reverse direction and break down on the arrival of a certain voltage. When current passing through the resistor is limited, a stable voltage is generated. It is widely using in power supply for stable the voltage. The Zener diode is a passive element and firstly introduce by Clarence Zener in 1934, 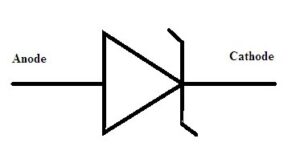 There are some applications of a Zener diode are given below:

The LED is a light emitting diode is one of most standard types of diode. When the diode is connected in forward direction than the current start flow from the anode terminal to cathode terminal through the junction and generates the light. The LED diode is use to convert electrical energy into light energy. First production started in 1968. It is use in special type of application. Over the years, the cost of the LEDs has fall down. They are extremely power efficient LEDs as the main source of lighting in homes, , streets (for street lighting as well as traffic lights), offices, automobiles car, mobile phones etc. 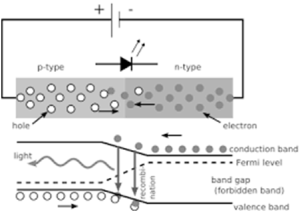 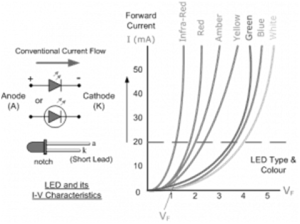 The function of Schottky diode BA 157 in SMPS circuit is fast switching rectification of power supply converter inverter and freewheeling diode for diode for consumer.

It is used in various type of application like detector diode, mixer and radio frequency etc. it is useful in power because of low forward voltage drop due to this power losses become low as compare to PN junction diode. Also, it produces less unwanted noise compare to the normal p-n junction diode. Sometime it is also known as Schottky barrier diode or hot carrier diode, majority carrier device, hot-electron diode and barrier diode. it was invented by the German physicist Walter H. Schottky. It is a semiconductor diode not exactly the conventional PN junction diode. The conventional PN junction diode has two type of material but the Schottky diode has diffusion of semiconductor and metal. The metal use in this diode has high conductivity, basically the material use in Schottky diode are gold, chromium, tungsten, molybdenum, platinum, or certain silicates. Semiconductor material is silicon. The symbol of Schottky diode is as shown below.

There is a large Application of in electronics industry, use in various types of electronics products.

The symbol of tunnel diode is as shown below. 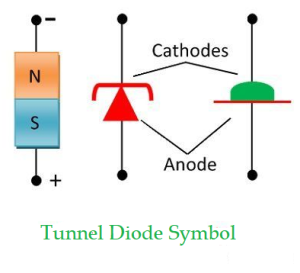 The advantages of a tunnel are given below −

The disadvantages of a tunnel are given below −

Applications of a tunnel diode are given below −

The varactor diode is reverse biased P-N junction whose capacitance is change in accordance with the applied reverse voltage across its terminal. The varactor diode is an electronics small component in which having two terminals one is anode and other is cathode. The diode can only work in one direction so it is called unidirectional component. In this tutorial we will discuss about variant of the diode.

“It is a variable capacitor type diodes whose capacitance value is changes with respect to voltage in a circuit and it is also known as varicap. It is a voltage dependent capacitor.” 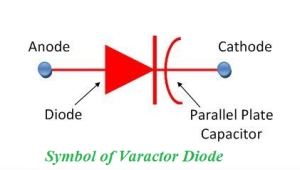 The symbol of varactor diode is shown below. It has two terminals one is anode terminal and other is cathode terminal. In the figure the one end show the diode and other end shows the two parallel lines that means conductive plates of the capacitor and the gap is dielectric material.

The advantage of varactor is given below-

Varactor is a import in our daily life. Some applications of varactor are given below.

Which type of diode used in amplifier?

What is diodes and its types?

A diode is a two terminal electronics component device. It is made of semiconductor material most of the useable material is silicon because silicon has work high temperature and small leakage current as compare to other material. There are various types of diode which is explained above article.