The XOR gate is very useful circuit in many type of combinational circuit. In this tutorial we will discuss about XOR gate. The XOR gate are also known as EX-OR gate or Exclusive-OR gate. It is not frequently use as OR gate, it has own significance. In previous tutorial we all ready discuss the AND gate and OR gate. In this tutorial we discuss the truth table, symbol and implementation of XOR gate. In XOR gate the output will be Q=1 when only A= “1” or B= “1” but not together at same time. When binary inputs “01” or “10” than the output will be “1”. This is known as XOR gate.

XOR gate is an important circuit use in digital electronic. It is also known as EX-OR gate or Exclusive-OR gate, which implement an exclusive or logic. When the output of XOR gate is “HIGH” its inputs will be different with each other. It is formed by combinations of standard logic gates that are mostly used in building arithmetic logic circuits, error detection circuits, computational logic and comparators.

There are multiple standers for defending the electronics component. Generally we use the Institute of Electrical and Electronics Engineers-IEEE and International Electrotechnical Commission-IEC standards and standards are shown below. 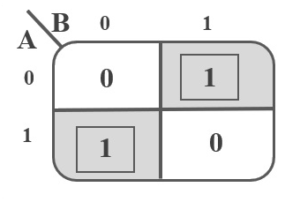 This truth table is use in K-map representation of the XOR Gate which is shown below.

The Boolean expression of XOR gate is Q = A’ B + A’ B
The truth table shown above that the output goes “HIGH” when the both inputs are “DIFFRENT” with each other and when the both inputs are same at a same time output will be “LOW”. Due to this reason the XOR logic gate to compare the inputs and produce an output value. It is mostly use in computational logic circuits. Then an XOR function with more than two inputs is called an “odd function” or modulo-2-sum (Mod-2-SUM),

In three inputs XOR logic is slightly different to the slandered XOR logic, because it has three inputs. The Boolean expression of the given logic is AB’C’ + A’BC’ + A’B’C + ABC. The symbol described this logic logic is a plus sign, ( + ) within a circle ( Ο ), and the resulting symbol for an this logic function being given as: ( ⊕ ). We already said this logic is not exactly same the basic logic, it is a combination of basic logic connected together to produce a XOR logic. Using truth table of two inputs, we can expand the XOR logic(A+B).(A.B)’ this means we can easily express the XOR gate using other logic.

The above figure shows the equivalent circuit of XOR gate using OR logic NAND logic and AND logic the outputs of OR and NAND logic goes to the input of AND logic. It is the easier way to produce the XOR logic.

The above figure shows the XOR Function using four NAND gates, it perform the adder and half adder asthmatic operations as they can provide a “carry-bit” function or as a controlled inverter,

The Boolean expression of XOR gate using NAND gate is:

Here is the some Following list commonly available XOR ICs. 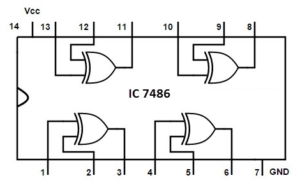 The Ex-OR gate ic 7486 is the Quad with 2 inputs logic. In this single package IC has four XOR. The detail of pin diagram and pin description is given below.

There are many application of Ex-OR logic gate. Some applications are given below:

This logic gate are use in half adder, it design for addition of single bit adder which is called half adder. It add two bit and produce one single output. The logic diagram is shown below. 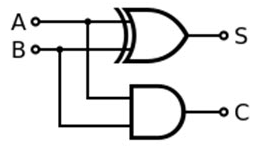 Binary Numbers
What is a TRIAC : Working & Its Characteristics
To Top