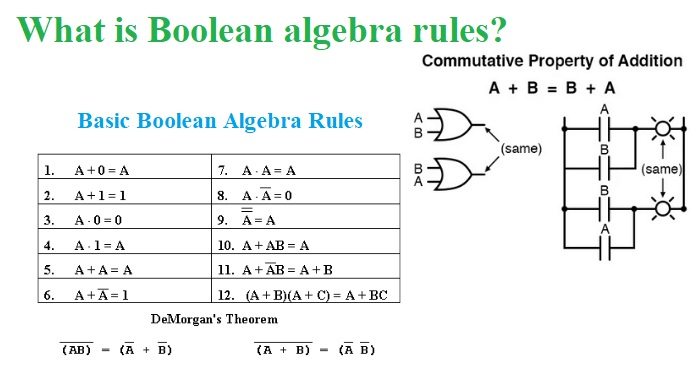 For instance, consider the Boolean function:

The logic diagram for this is F = x + y’z represented as:

The truth table for the Boolean function F = x + y’z can be represented as: 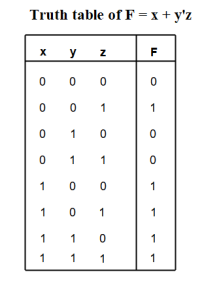 What Does Boolean algebra rules?

Unlike standard mathematical operations – addition, subtraction, multiplication and division – performance in Boolean algebra is unique and limited in number. There are three Boolean functions whose are AND, OR and NOT. The function NOT opposite is the reverse value of the given input signal. For example, 0 is the opposite of 1 and vice versa. AND operation returns 1 in case both inputs equal to 1 otherwise result is zero. Function OR returns only 1 if one of the given values ​​is 1. If not, it returns the value of 0.

The Boolean algebra was named after George Boole, a mathematician who first described it in 1847.

These laws of Boolean algebra are same for the more than three inputs.

This law has many inputs variables, where the OR operation of the variables result is the sum of variables. This law AND operation is same as of multiplication.
A+(B+C) = (A+B)+C
A.(B.C) = (A.B).C

AA+A’A+AB+A’B
From the truth table,

From the truth table,

Input A and output A(A+B) column is the same.

In this law variable remain unchanged it is OR with ‘0’ or ANDwith ‘1’.

A variable not change when it is ANDed or ORed with itself.

In this Law if a complement is added to a other input it gives one, if a variable is multiplied with its complement the results is ‘0’.

A variable with two compliments its symbol gets cancelled out and original variable is obtained.

The operation of an AND or OR logic circuit is change when all inputs are inverted.

Therefore, we conclude that Boolean numbers are completely different from real numbers and are a different kind of numbers. Due to its wide use and use, Boolean algebra is very prominent. So, do you know how Boolean Algebraic expressions are used?